We’re finally settled back at home after our best Origins yet! The week we spent in Columbus, OH was a whirlwind of meetings, events, and playing new and old games. We miss it already! 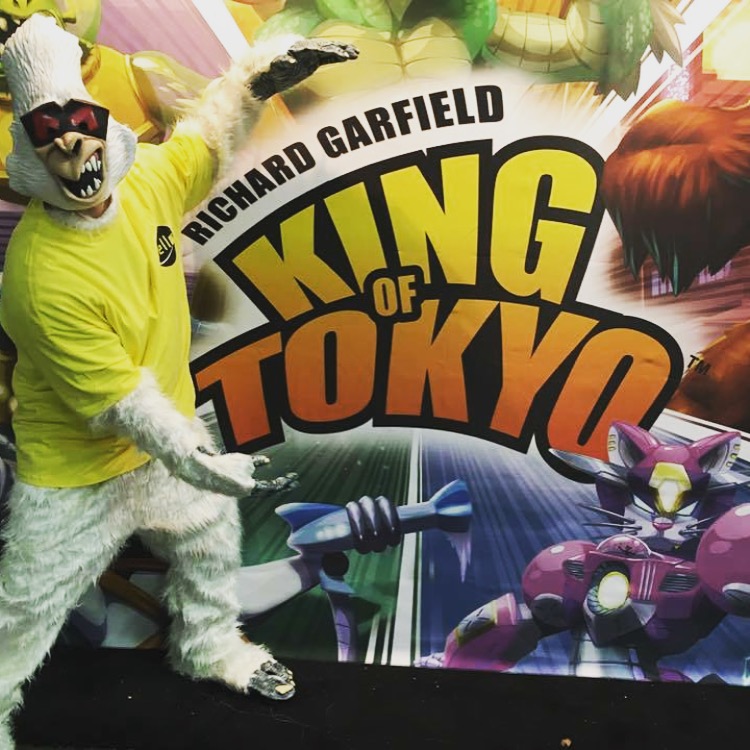 We had two areas again this year: a booth in the Exhibit Hall with our store and a section of the Open Gaming Hall where we had our League. At our booth, you could frequently catch glimpses of a Kong visiting from New York. Doesn’t he look awesome in his IELLO tshirt? We also had quick demos of our most recent releases and a bunch of  the new version of King of Tokyo for sale. 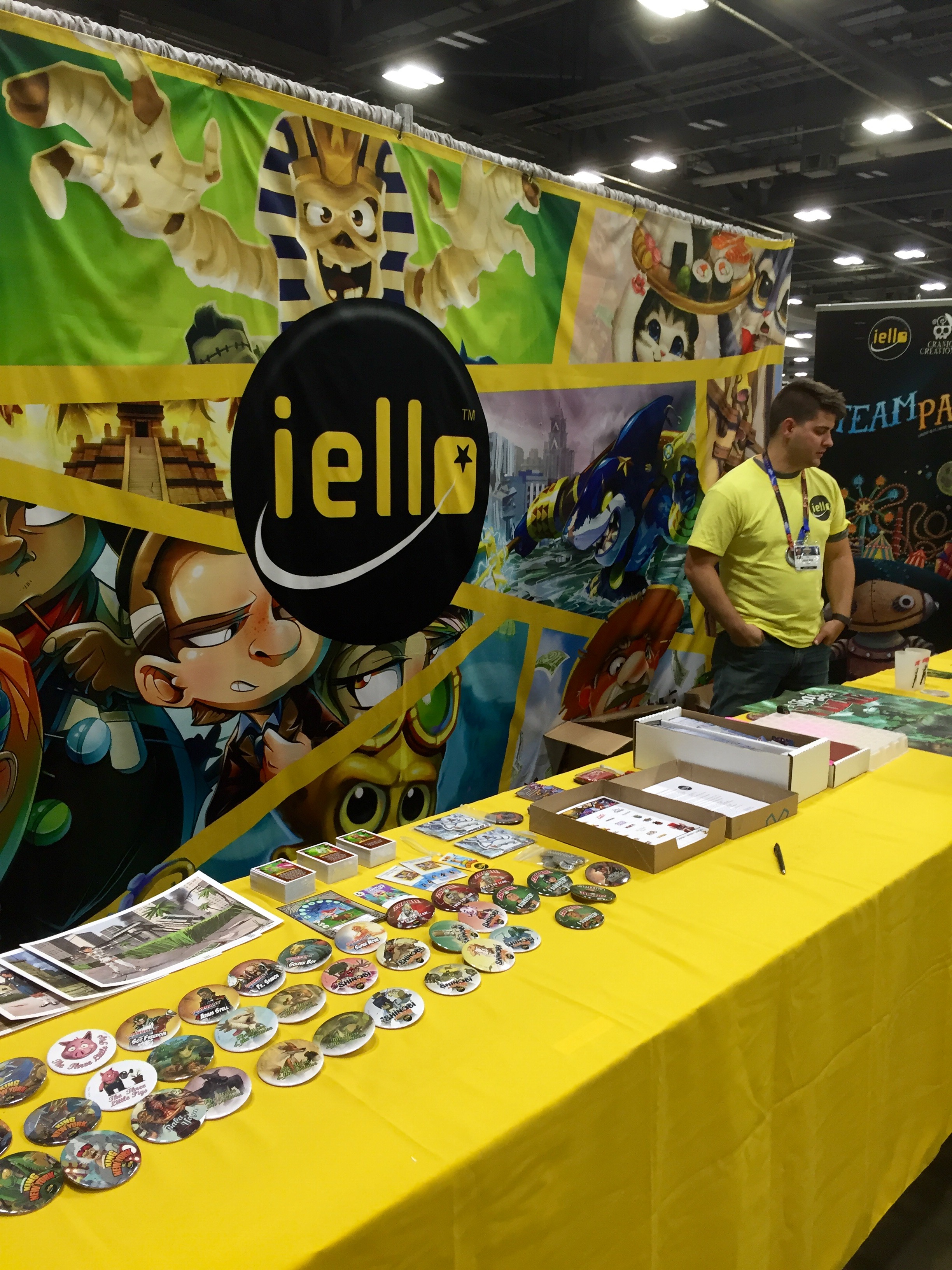 In our Organized Play area, the IELLO League was constantly a hub of energy and gaming. This picture is from Wednesday, the calmest day. Note: the nicely aligned stacks of papers and buttons. That didn’t last long, but we had a great time with everyone who stopped by and played! Everyone who participated walked away with an armful of promos and a well-stamped player card as a souvenir! 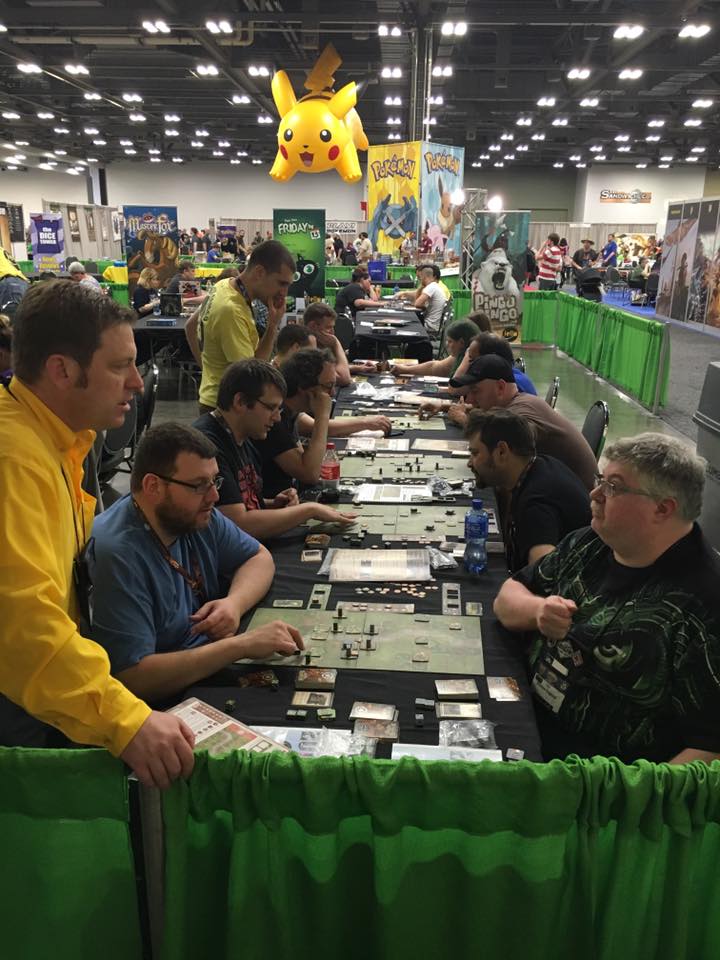 We also hosted the Heroes of Normandie Nationals at Origins this year. Clem, one of the designers, was our guest and had signings scheduled on Saturday. We were happy to host the Nationals at Origins this year since the show started as a place for war gamers to gather! We taught Heroes to many people during the convention, and a few of them left the show with their very own copy of the game! 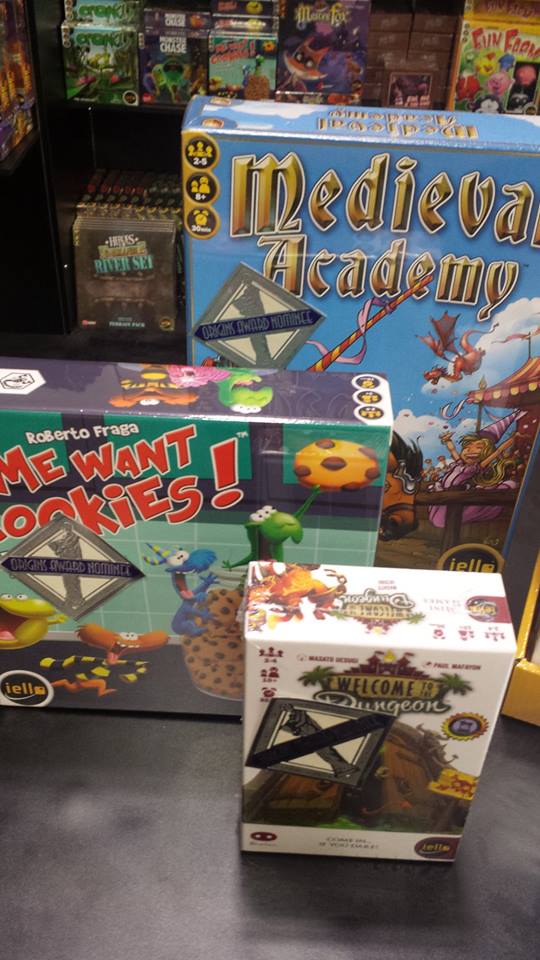 Three of our games were nominated for Origins Awards this year: Medieval Academy (Best Card Game), Welcome to the Dungeon (Best Card Game), and Me Want Cookies! (Best Family Game). They were up against worthy contestants, and while we didn’t come home with any trophies, we are honored for the nomination. 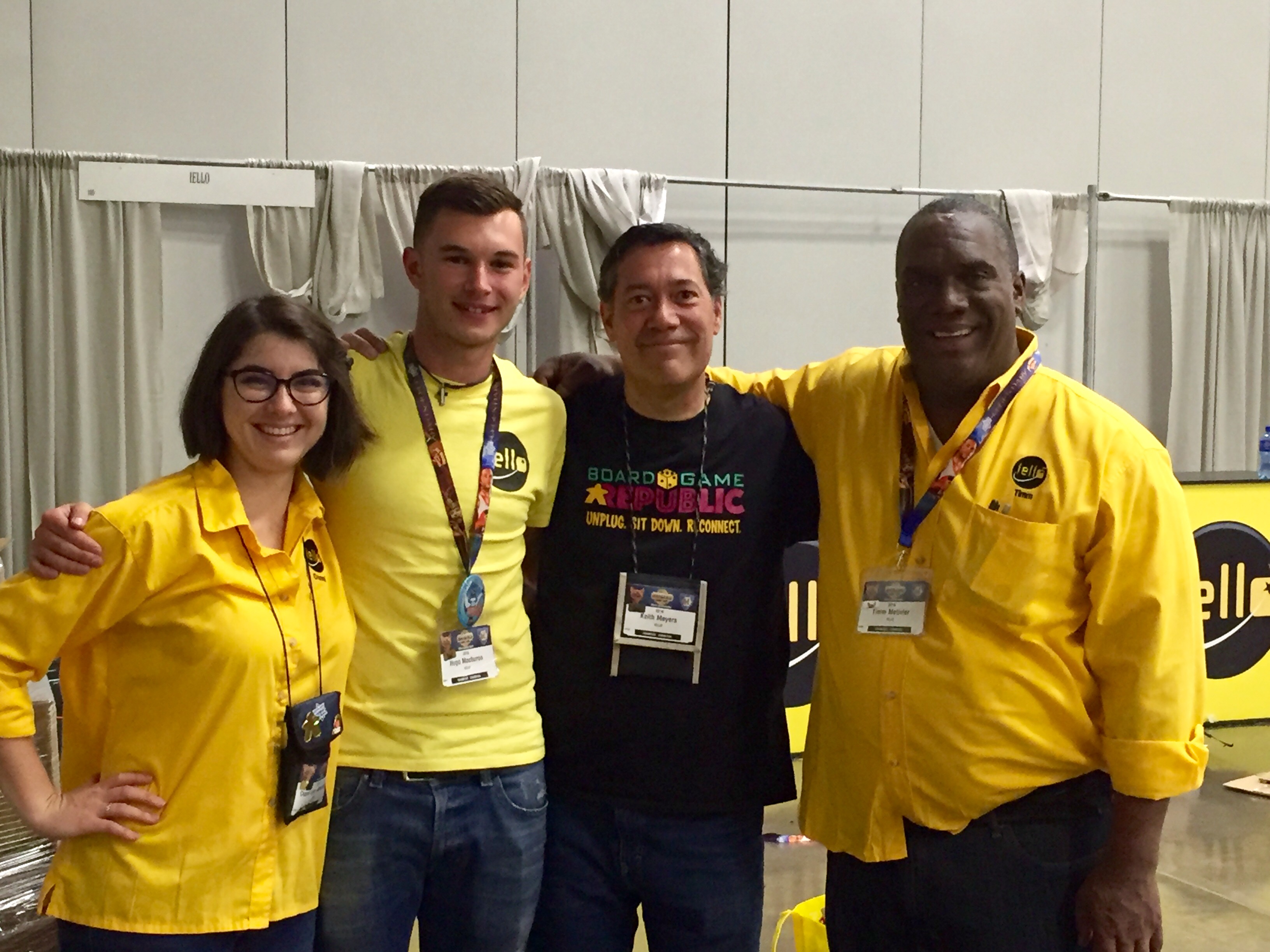 Sunday was the last day and while it was a long, busy show, the team still managed to keep smiles on their faces! Our awesome demo team helped with break down and everything was packed up for Gen Con before dinner time! We are already excited for next year and are brain storming ways to make our booths bigger and better for our fans! 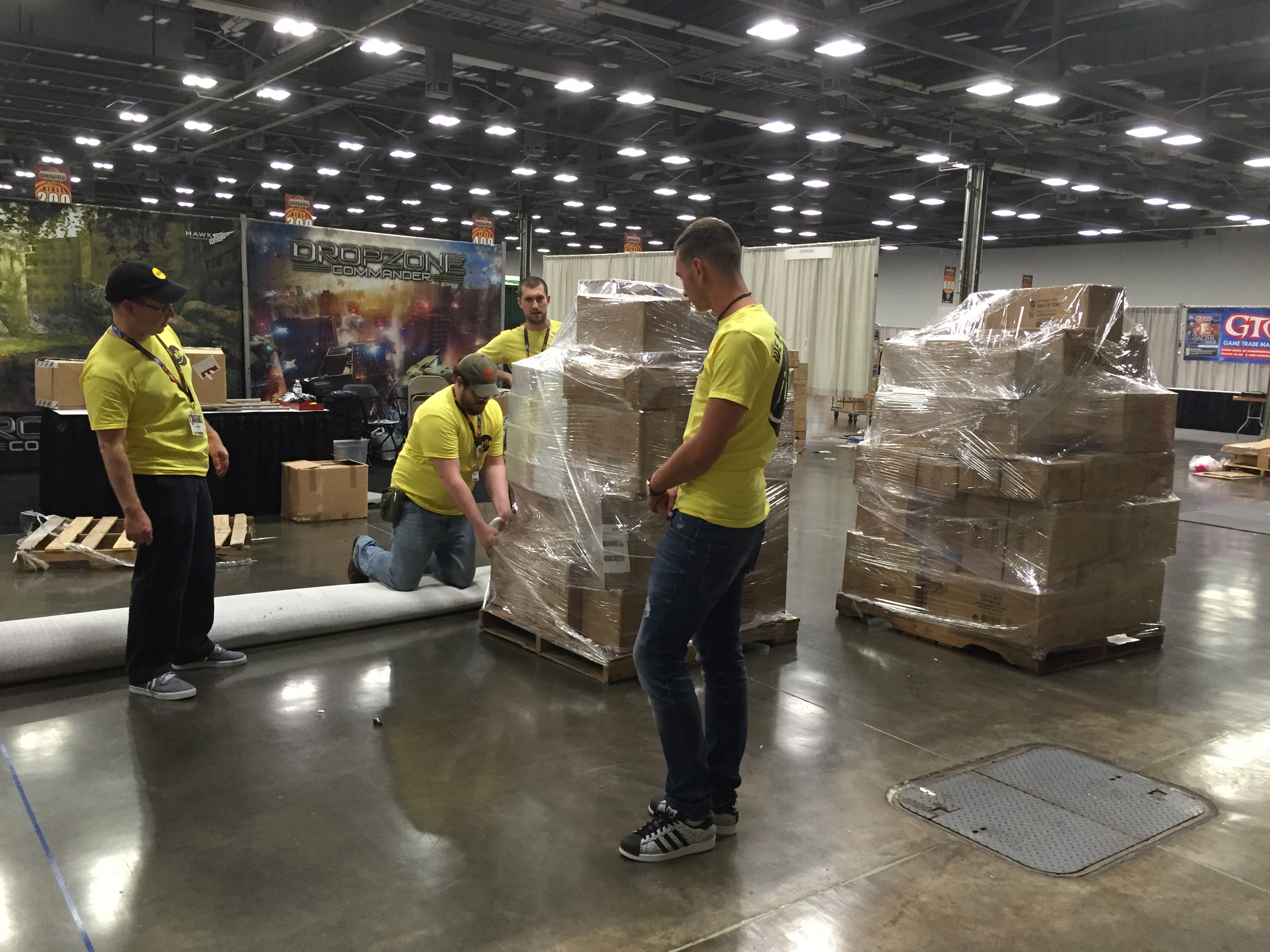 If you weren’t able to make it to Origins, we hope to see you soon at Gen Con in August! 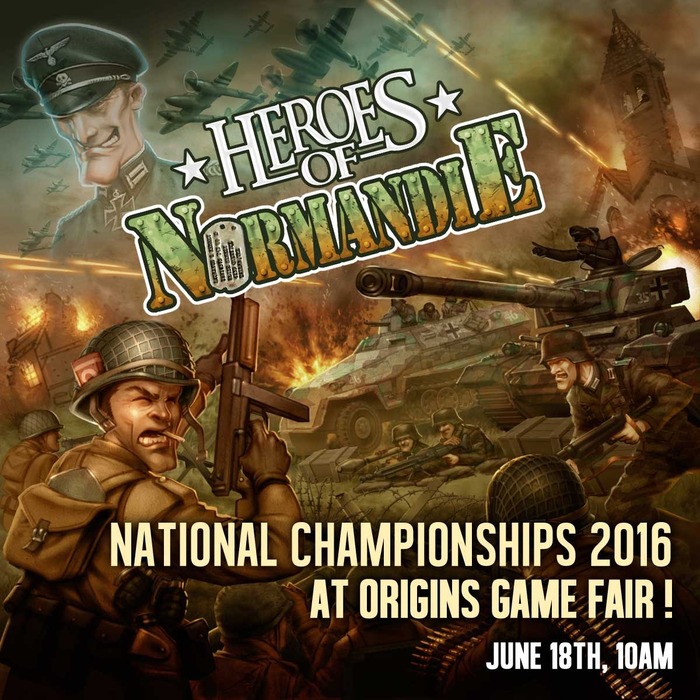 IELLO and Devil Pig Games are pleased to announce that the 2016 Heroes of Normandie National Championships will be held at the Origins Game Fair in Columbus, Ohio on June 18, 2016 at 10:00am. Heroes of Normandie is a WWII wargame focused on the Hollywood version of historical events during this period.

The National Championship is an open event and all competitors are welcome to attend. Participants should be familiar with the basic rules of Heroes of Normandie and will be presented with novel scenarios made specifically for the Nationals competition. Game materials are provided to all players and prizes will be awarded to the top winners. A valid badge to the Origins Game Fair and a ticket for the Heroes of Normandie National Championship are required for entry.

This event is not for the weak of heart! 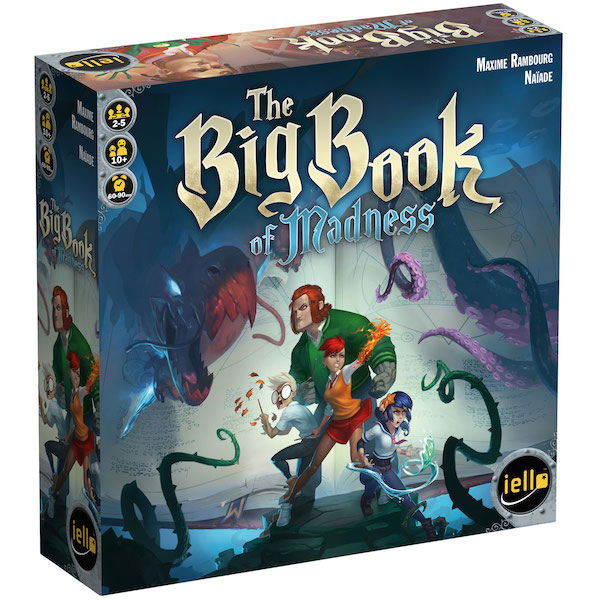 Today has been long-awaited by many gamers across the world (especially those of you who didn’t make it out to Essen)… The Big Book of Madness is now available for purchase! We’re really proud of this game since our French team has been working hard on this game all year long! The Big Book of Madness is a cooperative deck-builder from 2 to 5 players where each player is a magic student working together to imprison terrible monsters in the tome from which they were mistakenly released. Each player has their own element deck that they use to cast spells, heal curses, and improve their decks further. If you manage to turn six pages of the book and defeat all the monsters,  you win the game! For a closer look, you can Watch it Played by our very own Sara here, or watch a Dice Tower review here. 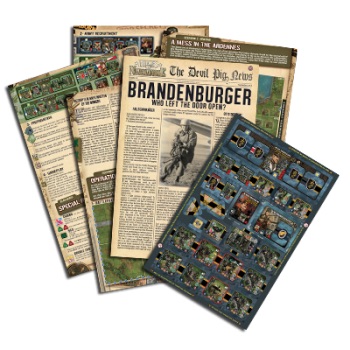 The Heroes Tactical System is also getting a new family member with the Heroes of Normandie: Gazette #4 releasing today. This is the fourth issue of the quarterly release by Devil Pig Games. The Gazettes bring new scenarios, new punchboards, and historical content to bring new life to your games! This issue in particular introduces the Fallschirmjägers and Skorzeny commando and pits armies against each other in Italy. For more info and scenarios, visit the Devil Pig website.

Today is a big day for the Heroes Tactical System! We have some expansions for Heroes of Normandie and also the release of a Lovecraftian stand-alone game in the same universe, and its first expansion. 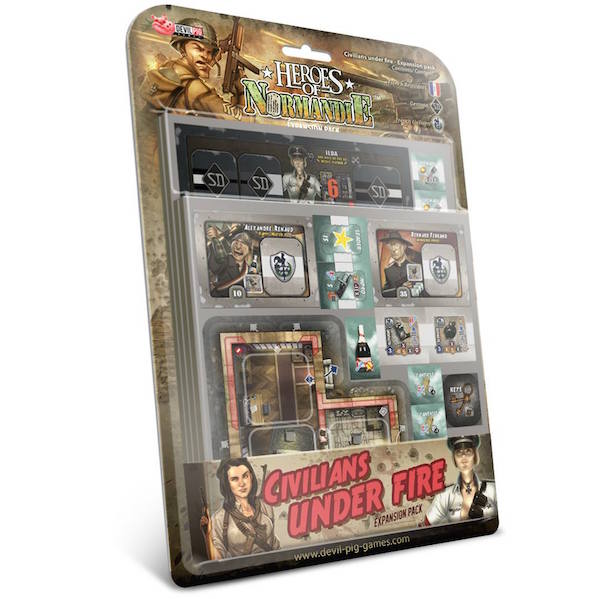 Civilians under Fire contains four punchboards (two large and two medium) with members of the FFI, vehicles, buildings, and make-shift weapons to bring more life to the battlefield! Recruit Bernard, the Armoured Priest, Alexandre, the Happy Mayor, Ilda, the She Wolf of the SS, and more in this expansion! Visit Devil Pig Games’ website to download the rules and scenarios for this expansion. 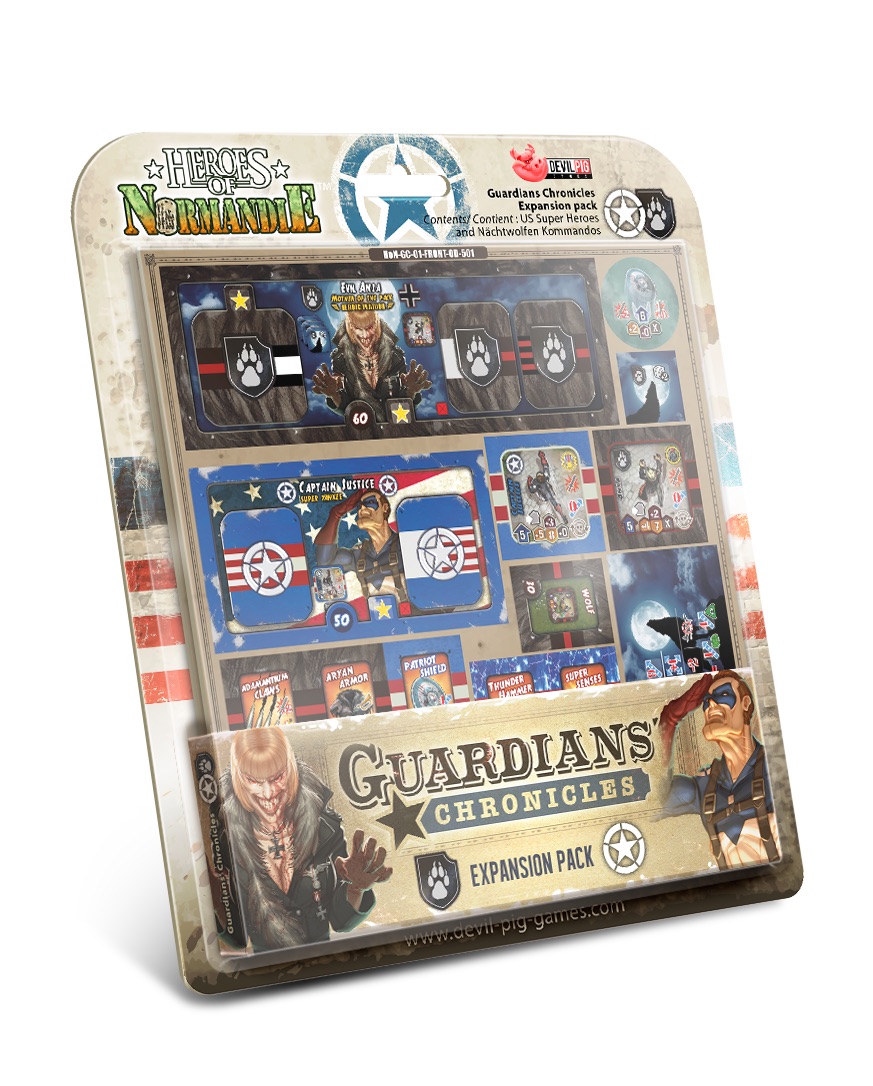 The Guardians’ Chronicles Expansion Pack introduces members of the Meta Squadron found in Guardians’ Chronicles to the battlefield with this two-punchboard pack. Pit Captain Justice and Lady Britain against Evil Anja and her werewolf pack! Super powers and super villains will add a new level to your battles! Visit Devil Pig Games’ website to download the rules and scenarios for this expansion. 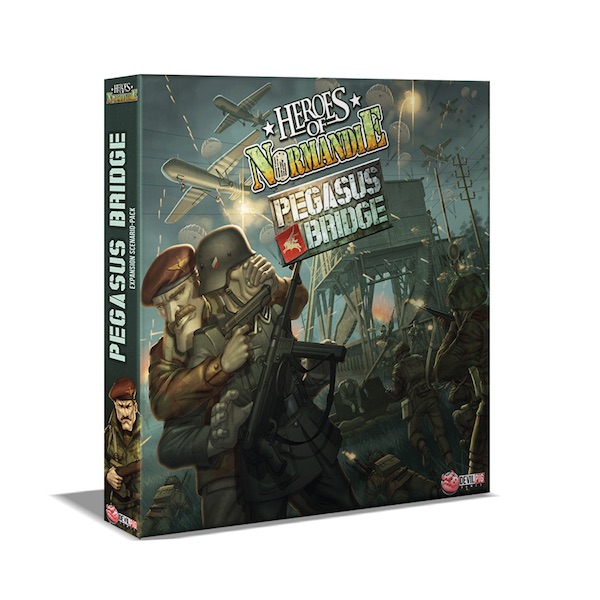 Pegasus Bridge is a bigger expansion that includes new recruits (infantry, paratroopers, and commanders), new terrain tiles, and new rules for night combat, drops, slipping units, and Gliders. This expansion is sure to help you recreate the paratrooper drops of June 6 onto the infamous bridge with 6 exciting scenarios and loads of content. It’s recommended you have the Commonwealth Army Box as well, but if you don’t, read this forum at Devil Pig Games’ website. 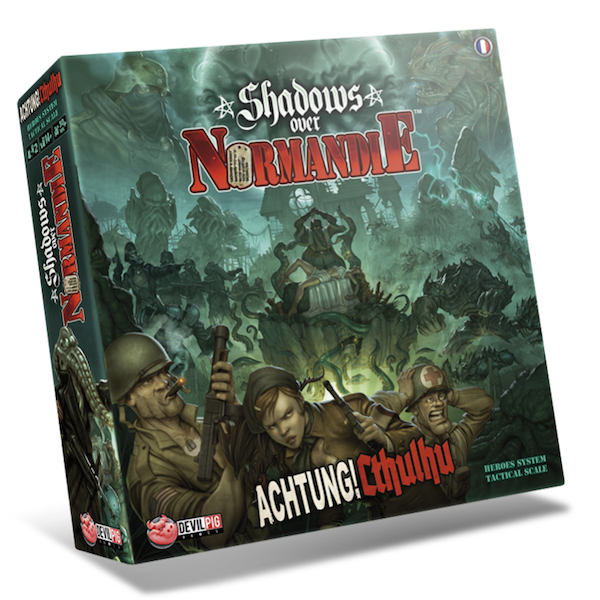 Shadows over Normandie introduces Lovecraftian forces to the Heroes of Normandie universe with the Deep Ones and Black Sun factions. Now you’ll be able to face dark magic and terrifying monsters with your troops. This stand-alone game comes with 6 double-sided map tiles, new heroes, buildings, and vehicles, and best of all, new rules! In addition to new attacks and spells, you can play with two or three players over the 10 scenarios. Order now and receive a double-sided poster and two promos! 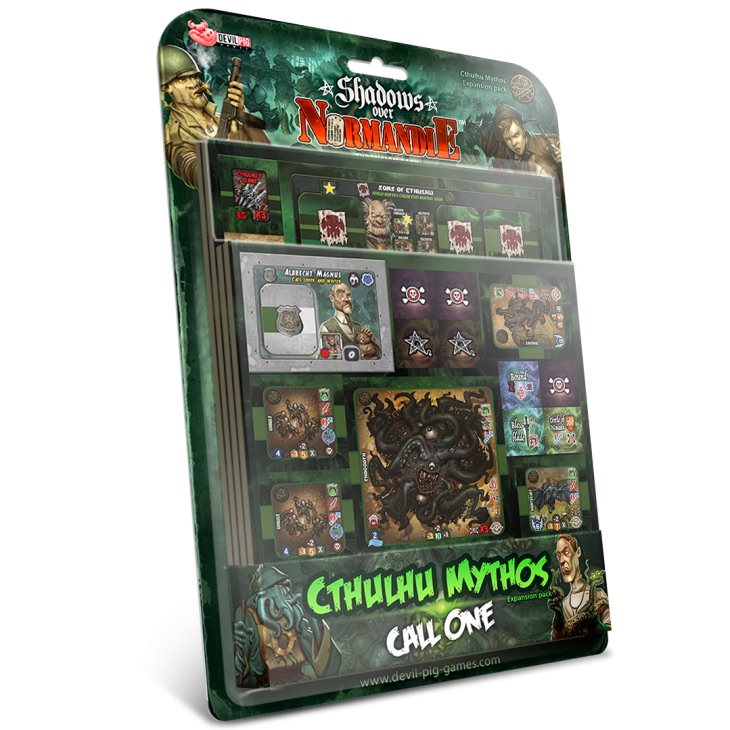 Cthulhu Mythos Call One is already available with more characters, villains, and artefacts! This expansion offers you many new and chilling occult gaming experiences, including recruiting H. P. Lovecraft himself into your army! Visit Devil Pig Games’ website to download the rules and scenarios for this expansion.

Today we’re releasing two very different games into our family: the fifth volume of our Tales & Games collection Little Red Riding Hood and the next expansion to Heroes of Normandie, Battleground Terrain Pack. 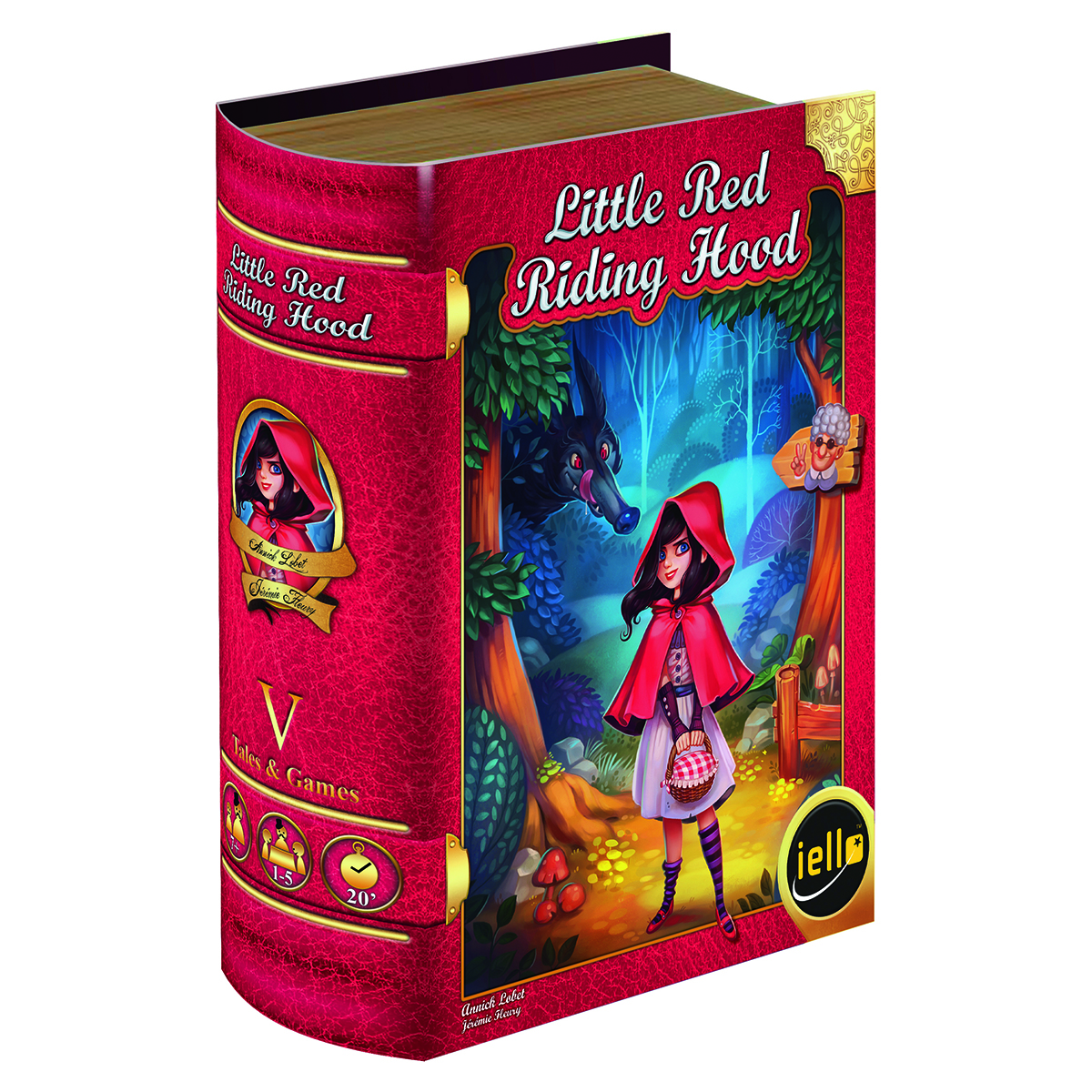 Little Red Riding Hood is the fifth volume in the Tales and Games series by Purple Brain Creations. This game follows the plot of the tale as Little Red attempts to follow the path to her grandmother’s house. Unbeknownst to her, the big bag wolf is close on her tale! Players can work together to help Little Red along, or one player can play as the wolf and against the others. In either case, players will draw cards and push their luck to move forward (or backward!) along the path. First player to reach grandmother’s house wins! Watch The Dice Tower review here, or watch us go over gameplay in this video. 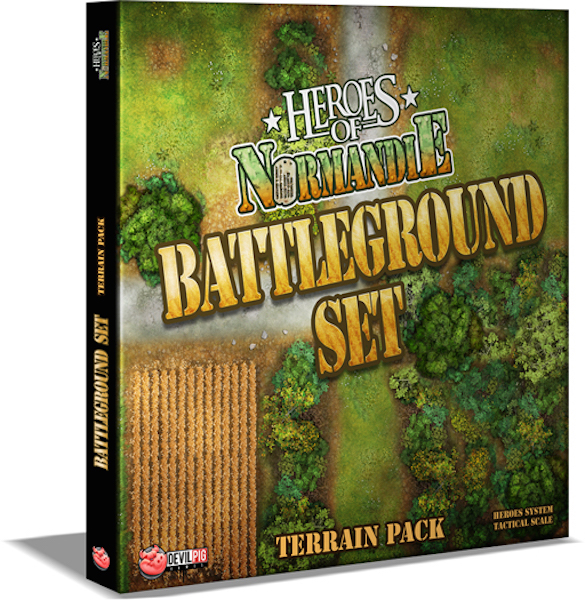 Expand your battles with six new double-sided terrain tiles! These include new terrain types and varied amounts of previous terrain types. Slog through the heavily wooded forest or scurry around the open wheat fields. You’ll also have new targeting rules and short walls for increased tactical decisions. These tiles are perfect for creating your own scenarios! Check out Devil Pig’s page to see all six tiles up close here! 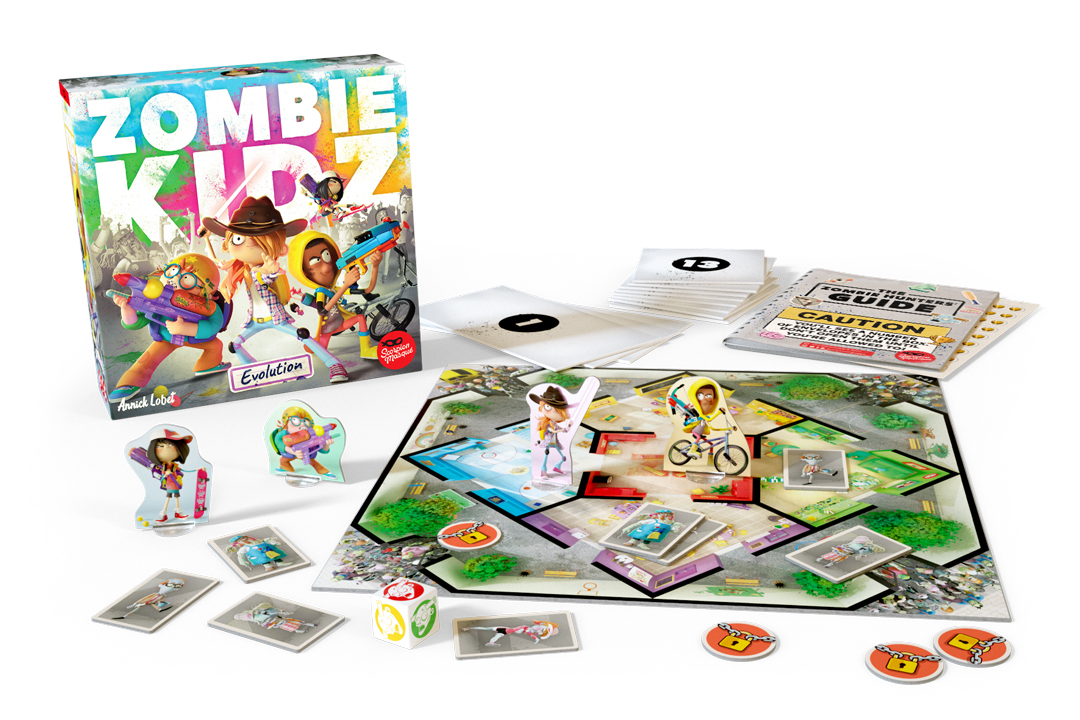 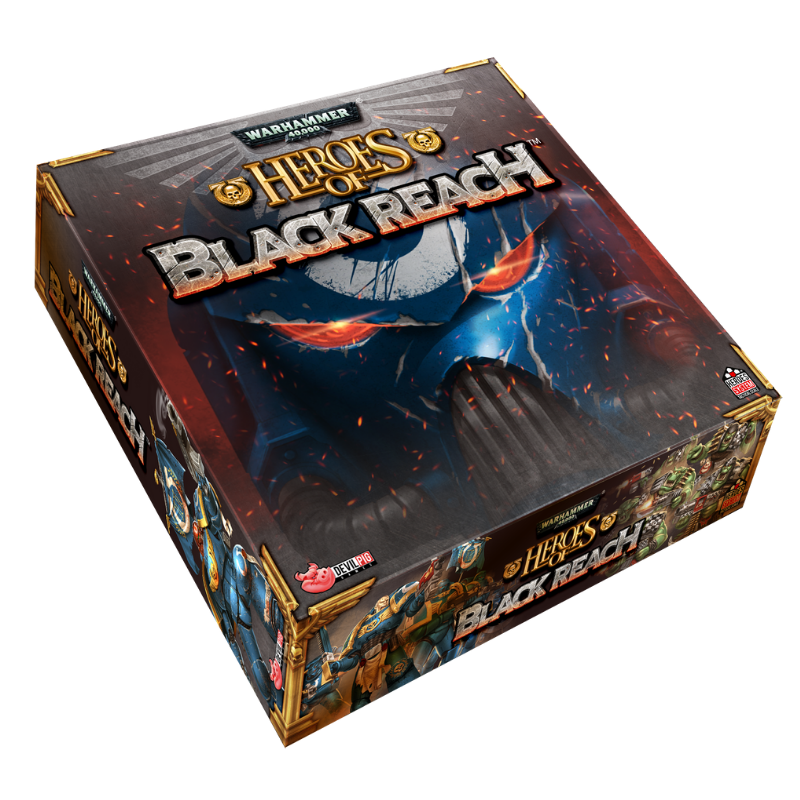 Heroes of Black Reach Giveaway
Hey IELLO fam! It’s 2019 and we’re here to give your boardgame collection a little New Year’s Boost. Enter to win the Heroes of Black Reach Core Box Giveaway below!   a Rafflecopter giveaway Terms: NO PURCHASE NECESSARY TO ENTER OR WIN. A PURCHASE DOES NOT IMPROVE YOUR CHANCES OF WINNING. VOID WHERE PROHIBITED BY […]
2018 Gamer Holiday Gift Guide
Illustration By: Apolline Etienne This Holiday Season Give the Gift of Fun! Check out the IELLO gift guide and find the perfect game for everyone on your list. Click here to view the gift guide.

Heroes of Black Reach Giveaway
Hey IELLO fam! It’s 2019 and we’re here to give your boardgame collection a little New Year’s Boost. Enter to win the Heroes of Black Reach Core Box Giveaway below!   a Rafflecopter giveaway Terms: NO PURCHASE NECESSARY TO ENTER OR WIN. A PURCHASE DOES NOT IMPROVE YOUR CHANCES OF WINNING. VOID WHERE PROHIBITED BY […]
2018 Gamer Holiday Gift Guide
Illustration By: Apolline Etienne This Holiday Season Give the Gift of Fun! Check out the IELLO gift guide and find the perfect game for everyone on your list. Click here to view the gift guide.